In a new interview with Welt Online, Rob talks about his future, his roles, and finding time to wake up in an ideal location. The following is a rough translation of the interview - and at least some of it was taken from the Berlin Water for Elephants press conference. 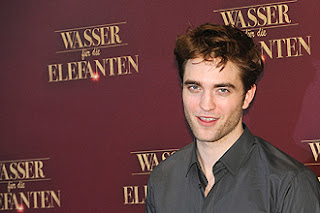 
Robert Pattinson about his circus movie 'Water for Elephants", the circus around his person and the nicest co-star.

He has been in Berlin before. At that time Robert Pattinson was 17 and "Everything was different". And he doesn't mean just the city. Back then he could walk the streets alone. Nowadays he promotes his new movie 'Water for Elepehants' at the Hotel de Rome while thousands of Twilight fans compass the Bebelplatz.

Welt: When you woke up this morning, did you know in which city you are right now?


Rob: Honestly? I had no idea. And this happens to me quite often lately.

Welt: You're jetting around the world for a couple of years now. Do you actutally feel at home somewhere?

Rob: I don't even have a home right now. My parents cleared out my room in London, so I'm without a doss right now. I'll work on that. Hopefully.

Welt: If you had the choice, where would you like to wake up?

Rob: There's a cottage in the South of France, where I've been a couple of years ago. There was nothing in the area, I was all by myself. I'd like that.


Welt: You have a very exceptional co-star in your new movie 'Water for Elephants'. How's it to work with a elephant?

Rob: It takes some of your self assurance away, no matter what kind of wild animal you're working with. Standing next to something this giant, makes you humble. On the other hand it seems like, that an elephant makes everyone happy. The whole crew became children again, trying to pet her all the time. Tai is a female elephant, she truly was the nices co star I've ever had. Kristen, forgive me.

Welt: Tai did something , a lot of your fans are envious about. She's was constantly touching you with her trunk, during the movie. Was is planned or did it just happen?

Rob: During the first weeks, we've trained with candy and soft candy so she'd follow me. After that she probably was convinced, that I always have them with me. She was constantly checking my pockets and every other place.

Welt: Does it have something methaporic? One should be a thick skinned person in the movie buisness?

Rob: Absolutely. I used to be at many auditions, you're one of 200, waiting for hours on your chance. And then they just take a glance at the first page of your application and tell you: No. If you've experiences this a hundred times, you immune to disappointment. You couldn't stand it without a sick skin.

Welt: After all those vampire-teen movies you're coming along with Water for Elephants and the upcoming Maupassant remake 'Bel-Ami'. Is this a ripening for you as an actor?

Rob: Yes, I hope so. I sill don't feel grown up. I do look more mature in 'Water'. I had to play the eternal 17 year old, trimmed to look like it, in the Twilight movies. Getting more mature roles is like a blessing. I must and have to prove that I can do it.

Welt: After three years of Twilight: Did you definitely wrap the fifth part?

Welt: And did you celebrate it?


Rob: Kind of. People were constantly leaving the set so we've celebrated for quite some time. The last scene was just Kristen Stewart and me. It was on a warm, bright beach, a beautiful end after shooting five movies in the cold.

Welt: Are you looking forward to your life without Twilight?

Rob: It's not quite over yet. It takes some time until the 5th movie is out and promoted. But yes, it takes some weight off your shoulders. We've shot the last two movies right after another, the constant make-up and 'whitening' took a lot of time. But I might miss all of it. It was an important phase of my life, afterall.

Welt: Isn't the hype around you like a circus?

Rob: Sort of. You can't prevent it though. You're a little bit like a dressage horse, constantly keeping up an illusion. The worst time was when I did nothing. I just had to be there and stood around. The last time I went to Germany, I went into the Müncher Olympiastadion with Taylor Lautner and 30.000 girls were screaming. It was bizarre. Like a rockstar just without making music. They've told us to let them scream for 15 minutes until they'd lose their voices and then we went to the next event.

Welt: Would you've rejected the role of Edward Cullen if you knew about the massive hype beforehand?

Rob: Who knows. Maybe I'd have considered it. But I don't want to be ungrateful. The worst time of my life was when I had no job. I've asked myself: What are you doing here? I almost gave up. I didn't see a future despite my thick skin. But the industry is quite strange: back then I hit rock bottom. I thought this is my last shot, and there were 3000 competitors. But then I became Edward. And suddenly I can make the movies I've always wanted to make. That's my motiviation. I don't want to be a memory as the guy who played this vampire.