Rob Talks About What Matters To Him: The Oil Spill Disaster, Football & Girls 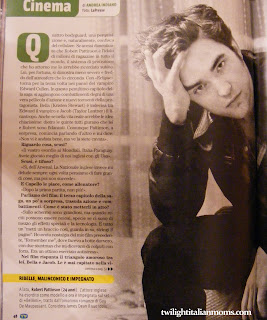 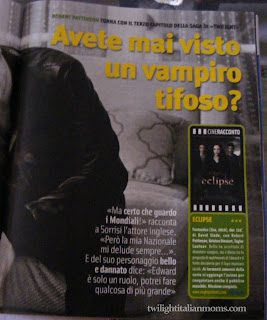 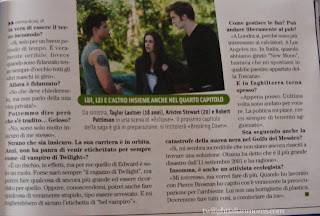 Translation:
Have you ever seen a soccer fan vampire?

Four bodyguards, a frisk and, obviously, cellphone confiscation. If I had forgotten Robert Pattinson’s every girls in the world’s idol, his security service would had been there to remind me so. Fortunately, he seems less cold and strict than what he’s got around. With Eclipse, he’s in Edward Cullen shoes for the third time. In this next to last movie of the Twilight Saga, we can find as many fights as one could see in a real action movie and new love issues for the female main character: Bella (Kristen Stewart) has to choose between the vampire Edward (Robert Pattinson) and the werewolf Jacob (Taylor Lautner). Even if in the real life, she knows exactly who to choose: some behind-the-scene rumors have she and Pattinson are dating. Pattinson, anyway, starts surprisingly saying: “It hasn’t been very good, but you’ve got it”

Excuse me, what are you talking about?
Your World Cup Championship’s first match. Italy-Paraguay. You played better than England against USA.

Excuse me, are you a fan?
Yes, Arsenal’s. England always lets me down: every time we think to do big, we fail.

Do you like Capello as a coach?
After the first match, not anymore!

Let’s talk about the movie: this third chapter of the saga is full of action and fights, surprisingly. How has it been?
On the screen they’re great, but when you act they can be boring, especially if there’ll be special effects and lots of technology involved. Everything goes like this: ‘put your arm this way, look up, be tight’. I missed my previous movie, Remember Me, where I have really fought with two stuntmen who told me where to hit them. It has been an excellent anti-stress exercise.
In the movie we see again the love triangle between you,

Bella and Jacob. Have you ever been the third wheel in real life?
Yes, but only for a short time. It’s really horrible. But when I’m dating someone, I always take a look at every other men around.

So are you dating someone?
I know you have to ask me that, but I don’t talk about my private life.

We can say you let something slip… are you jealous?
No, I’m just a very insecure person.

It’s strange. Your career is up. Don’t you think you’ll always be pointed to as the ‘Twilight vampire’?
It’s a chance, you’re right, but for me Edward is just a role. Maybe I’ll be the “Twilight guy” forever, but I could do something even bigger and being remembered for that. Or, if I know myself, I could do something very stupid, like being arrested. And they would take the ‘beautiful vampire’ thing out of me for sure.

How’s your relationship with fans? Are you free to go to the pub?
I can do that in London, ‘cause they’re more interested in soccer players. In Los Angeles I can’t. When we shot in Italy, I just went in some lonely little towns in Tuscany.

Do you go often in England?
As soon as I can. The last time I’ve been there was to vote. I like politics, I always try to keep up

Are you keeping up with the Gulf Of Mexico catastrophe too?
Yes, it seems unbelievable they haven’t find a solution yet. Obama said it’s the greatest disaster after 9/11 and he’s right.

So, are you a nature activist?
I like it, but I’d like to do something more. When I worked with Pierce Brosnan I’ve understood what the nature issue really is. He doesn’t use plastic bottles. Everyone should do that, me first.

REMINDER: as part of our birthday gift to Rob, we have a project to support the cause he supports: the WWF. Please check out the page, leave a message for Rob, and if you can, donate. Anything makes a difference. Thanks to those who have already donated. Much appreciated.