And it's a poster! 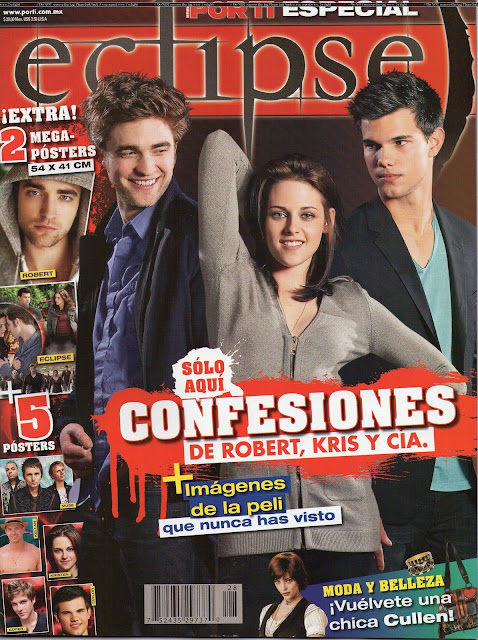 check out the rest of the scans at Twilight Poison, who's also translated it for us.
Por Ti magazine (Mexico) has an interview with the cast. Here’s the complete translation and scans. As usual, please link back if you re-post the translation and scans :) . Some answers seem familiar, so I’m just going to translate a little portion of the interview. The rest we’ve read before.

We are dying to see Eclipse. Tell us, what was filming the movie like?

Kristen: We had a lot of time to prepare for it. Luckily, the budget is bigger as well. It’s amazing seeing the final product on the screen.

Rob: The fans are really going to enjoy this one.

Taylor: It’s a lot more intense. We loved what we’ve seen of it.

What do you guys like the most about your characters?

Kristen: I like everything about Bella. I’m a big fan of hers. In every movie I try to add a little bit of myself to her and that’s because I relate to her a lot. She’s so weird! She thinks a lot about what she’sgoing to say or do, like me.

Edward: I like that Edward is so agressive but humble as well. He’s like this humble gentleman, but there’s this really aggresive and dangerous part of him too.

Taylor: Jacob is a lot of fun. He likes to laugh and have fun. It’s fun playing him.

What are you dying to see onscreen?

Robert: Bella! Can’t wait to see when she cheats on me. It’s a great scene, you’ll see.

Kristen: I can’t wait to see the love triangle. We had seen a very innocent contact between Bella and Jacob in New Moon, but in Eclipse it’s more real. I’ve always supported Bella’s devotion to Edward, but I think it’s going to be interesting to see her betraying him.

What was the hardest scene for you guys to film?

Rob: Itwas hard for me to propose so formally to Bella. The first timeI read the script, I was terrified. I thought it was impossible.

Kristen and Taylor (at the same time): A Jacob and Bella scene (laughs).

Really? What happened in that scene?

Taylor: Jacob, in his wolf shape, is being pet by Bella and she scratches his ear.

Kristen: Yeah, it’s a scene where I’m talking to the wolf, but he’s not there, so I had to pretend he was there. I didn’t know what to do without his support, so Taylor offered to be a stand in.

Thanks to Twilight you’ve been able to travel all around the world. Which were your favorite places?

Taylor: Australia. We just went there and it was amazing. There’s so much to do there.

Kristen: New York is one of my favorite cities, but I really liked Mexico city. I hope I go there again sometime.