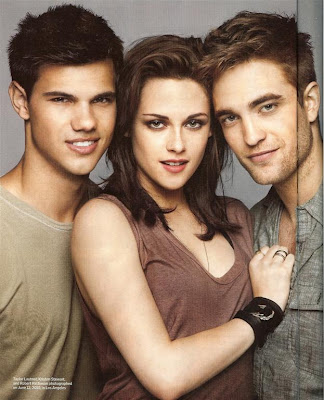 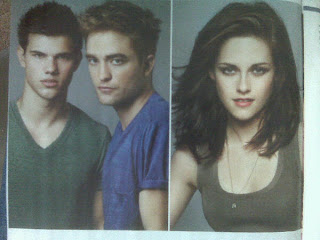 As the highly-anticipated Twilight Saga: Eclipse prepares to descend on theaters June 30, stars Kristen Stewart, Robert Pattinson, and Taylor Lautner get together in L.A. for a frank discussion about the roles they play within the Twilight universe — both on screen and off. They also open up about their Oprah appearance, staying fit, and what it took to film a climactic scene in Eclipse, in which the three characters are forced to wait out a blizzard in incredibly close proximity.

ENTERTAINMENT WEEKLY: One scene fans have been dying to see takes place in the tent during the snowstorm. Jacob warms up Bella with his body because Edward is cold-blooded and can’t do it himself.
LAUTNER: The tent scene is probably my favorite, because it’s the first time Edward and Jacob are actually able to connect and understand each other.

How many takes did you go through to get that scene?
LAUTNER: Two days originally to film it, and then a full day of reshoots.

Taylor, you and Rob have some pretty serious confrontations in this movie.
LAUTNER: Some of those scenes were pretty hard for me. I think we ruined a couple of takes in front of the house and in the tent. It’s just, I don’t know, I have a hard time looking at him…
STEWART: Ha! “I have such a hard time looking at him”!
LAUTNER: [Laughs] I wasn’t finished. He and I were thisclose to each other — we are literally, like, an inch away — and we’re screaming at each other.
STEWART: And about to kiss…
LAUTNER: A couple of moments it felt like that.
PATTINSON: Every single time we had to do a threatening thing to each other — for one thing, you always have your shirt off, and so in the tent scene I literally grabbed your breast. And it’s very difficult to remain in the moment. Also, in the tent scene, I can’t really get over the fact that the word thought sounds like fart.
STEWART: The word thought does not sound like fart.
PATTINSON: It does.
STEWART: Maybe because you are an English person.
PATTINSON: The opening line of that scene is “Can you at least keep your farts to yourself?” I couldn’t quite get over that.