"He’s Not Diva At All, You Know. He’s Really A Sweetheart" 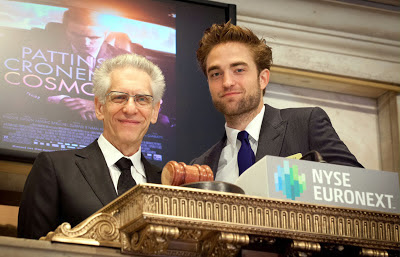 We know Mr. Cronenberg, we know!

From the minute he started promoting Cosmopolis, director David Cronenberg hasn't stopped praising Rob. Now the director is back at it again, this time with First Post Bollywood:

The thing I liked about Rob Pattinson as an actor is that he’s a serious actor. And you could lose sight of that, because he’s had this big popular success with the Twilight movies, but he is not afraid to play a character who is difficult to like, you know, because some actors are afraid to do that, because they feel it is too personal, that they themselves will not be liked by their audience, and so on. But a real actor is not afraid to play an unsympathetic character, and Rob is a real actor.

Also, I think to be an actor, you need intelligence, first of all. For example, Rob immediately realised that the script was quite funny, and most people don’t get that. Then you want sensitivity to the subtleties of the movie, in terms of what is going on in the movie, the dialogue and so on. And Rob, personally, is very knowledgeable about cinema.

(chuckles) I don’t think his Twilight fans realise this about him, but he’s really an aficionado about art cinema. I mean, on the set I’d find him talking to Juliette Binoche about obscure French cinema, (chuckles) so you know, he brings a real depth of understanding of the history and art of cinema and all of those things mean that you have a lot of power and a lot of responsiveness from your actor as a director. It’s like driving the Ferrari instead of driving, you know, a Volkwagen Beetle. And you get that with Rob. I must also add, he’s very down to earth and very easy to work with. He’s not diva at all, you know. He’s really a sweetheart.

Cronenberg shares a lot more about the film, so make sure to read the rest!

The director also shared some scoop on the day they went to Wall Street:

SCR: A lot of people didn't see the irony or the satirical posture behind you and Pattinson ringing the bell at the New York Stock Exchange.

CRONENBERG: Yeah, I know, some people thought that we were betraying the movie by doing that. I thought, no, no, you're really not getting it at all. That was so perfect. I couldn't believe when they were asking us. But that was the perfect expression of capitalism. They were lovely there. They were so excited, they love their Stock Exchange and, after all, we were selling a movie and selling is what they know. So it was all perfect. A capitalistic enterprise, and there we were.
Here's the rest of that interview.

Email ThisBlogThis!Share to TwitterShare to FacebookShare to Pinterest
Labels: All About Rob, Cosmopolis, Promo