Entertainment One sent over the official press release for the Cosmopolis DVD/Blu-ray, that will be released in the U.S. January 1st. We'll post our review soon, and check out the extras below! 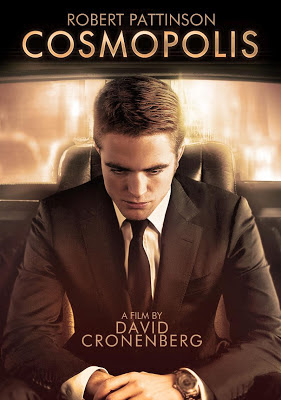 "Loaded with strong performances that connect on an emotional level...
prepare for it to stick in your head for days."
-- Rene Rodriguez, Miami Herald

ROBERT PATTINSON STARS IN DAVID CRONENBERG'S TOUR DE FORCE BASED ON DON DELILLO'S PROPHETIC NOVEL, ARRIVING ON BLU-RAY
AND DVD ON JANUARY 1 FROM ENTERTAINMENT ONE

C0-Starring Oscar® Winner Juliette Binoche, Nominees Paul Giamatti and Samantha Morton and Jay Baruchel, the Release is Loaded with Extras Including a "Citizens of Cosmopolis" Featurette, Audio Commentary with David Cronenberg and Interviews with the Cast and Crew[1]

From director David Cronenberg (A History of Violence, Dead Ringers, Eastern Promises) and based on the prophetic novel by Don DeLillo, comes COSMOPOLIS, a contemporary thriller that turns into a wild, hypnotic odyssey through our new millennium's obsessions with power, money, control, information, technology, violence, sex, mortality, revolution, destruction and ultimately, redemption. Available on New Year's Day 2013, Entertainment One presents this acclaimed 2012 U.S. theatrical release on Blu-ray and DVD, packed with extras including a "Citizens of Cosmopolis" featurette, audio commentary with director Cronenberg and interviews with the cast and crew.

Unfolding in a single cataclysmic day, the story follows Eric Packer (Robert Pattinson, Water For Elephants, The Twilight Saga) - a 28-year old financial whiz kid and billionaire asset manager - as he heads out in his tricked-out stretch limo to get a haircut from his father's old barber, while remotely wagering his company's massive fortune on a bet against the Chinese Yuan. Packer's luxe trip across the city quickly becomes dizzyingly hellish as he encounters explosive city riots, a parade of provocative visitors, and is thrust into a myriad of intimate encounters. Having started the day with everything, believing he is the future, Packer's perfectly ordered, doubt-free world is about to implode.

The creative team includes many of Cronenberg's long-time collaborators, including Director of Photography Peter Suschitzky (A History of Violence), Production Designer Arv Greywal (Lars and the Real Girl), Costume Designer Denise Cronenberg (Eastern Promises), and Composer Howard Shore (The Lord of The Ringstrilogy), who wrote original music for COSMOPOLIS in collaboration with Metric and K'Naan. COSMOPOLIS is a Canada-France co-production by Paulo Branco (Mysteries of Lisbon)
through Alfama Films Production (Paris) and Martin Katz (Hotel Rwanda) of Prospero
Pictures (Toronto).

About Entertainment One
Entertainment One Ltd. (LSE:ETO) is a leading international entertainment company that specializes in the acquisition, production and distribution of film and television content. The company's comprehensive network extends around the globe including Canada, the U.S., the UK, Ireland, Benelux, France, Germany, Scandinavia, Australia, New Zealand and South Africa. Through established Entertainment and Distribution divisions, the company provides extensive expertise in film distribution, television and music production, family programming and merchandising and licensing. Its current rights library is exploited across all media formats and includes more than 20,000 film and television titles, 2,500 hours of television programming and 45,000 music tracks.