Naomi Watts Says It's "Wait & See" On Queen Of The Desert

UPDATE: Jude Law has confirmed our fears about a delay in this project.

No, Queen of the Dessert, I don’t think is going to happen now, or I don’t think that I can be involved in it anymore. I’m not sure what happened there, whether they can get it together I don’t know.

As for projects that may or may not be happening, Law confirmed Naomi Watts' statement that Werner Herzog's Gertrude Bell biopic "Queen of the Desert" is now on hold and he will likely be no longer be available for it when it returns. "I don’t think that’s happening. I don’t think I can do that anymore," he admitted.

Like we said below, at least Rob has plenty stacked up for this year. 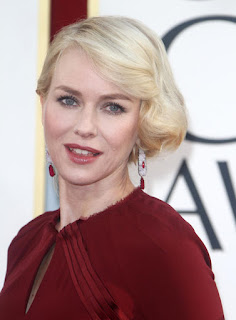 While talking to Josh Horowitz at Sundance she gave an update on Queen of the Desert, and it looks like it could be a while..

"It's still a way's off" - "I don't know yet. Hopefully, it will happen. I just can't travel again right now because I did a lot of traveling last year. It's been a big year and it's time for me to be home with the kids."

It sounds to us like this is one project that's probably not happening this year. Good thing Rob has Map to the Stars, Mission Blacklist, and Hold on to Me lined up!

Email ThisBlogThis!Share to TwitterShare to FacebookShare to Pinterest
Labels: costars, News, Queen of the Desert, Sundance