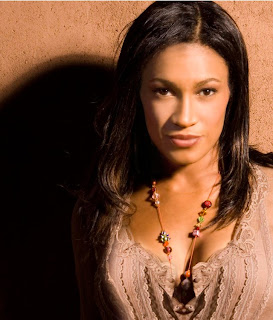 Patricia McKenzie (who plays Eric Packer's bodyguard in Cosmopolis) gave a great interview to Cosmopolis Italia - the key parts below *spoilers* - make sure to read the rest at their site.
CI: In “Cosmopolis” you play Kendra Hays, Can you tell us something about her? Who is Kendra?
PM: Kendra is an exhibitionist who craves power and wants to dominate Eric Packer (Robert Pattinson) sexually. She was initially hired to be his bodyguard, but quickly becomes his lover. They are opposites in many ways, but both are hollow inside and searching for meaning in their existence. Ultimately, they risk leaving each other feeling as empty as they started.

CI: Did you give any workout tips to Robert Pattinson? How about your own workout schedule?

PM: Our love scene happened one month ahead of schedule so neither of us had time to get in the exact shape we wanted to be in, but I did a juice fast three days prior, and he went to the pub and drank a beer. Rob already has an incredible screen presence that comes easily to him, so he is very relaxed about how he appears.
A few months before we started shooting, I started boxing and combat training and I did a 3 week detox. It was something I always wanted to try, so I used the film as my motivation. I really enjoyed the process and have integrated the healthy eating and the boxing into my lifestyle.

CI: One of your scenes involves you shooting Robert with a taser gun..did something funny happened that day? can you tell us something about it?

PM: For me the funny thing was that everyone approached the scene with no idea what was going to happen, but to be ready for anything. David, Robert and I explored it together, the way we might do if it were a play. We thought we had it nailed down, so we took a lunch break for the crew to light the scene. Then, after lunch, David said he wanted to shoot the scene a different way so the crew took time to re-light everything and Robert and I had time to bond a bit more before we started shooting the love scene. The result is amazing, very sexy, tense and humorous. I can’t really say what happens with the taser, you will have to see the movie to find out!