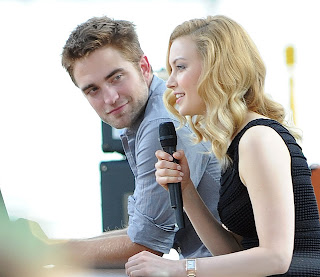 Nikki Finke today confirmed that Map to the Stars will indeed start in July (news had leaked a while back), with production set for L.A. and Toronto. We also learned who will join Rob in the film, after Rachel Weisz and Viggo Mortensen ended up dropping out of the project:

Canadian giant Entertainment One will team with Martin Katz’s Prospero Pictures to back David Cronenberg’s upcoming ensemble thriller Maps To The Stars. Julianne Moore, John Cusack, Robert Pattinson and Sarah Gadon are to star in the ghost story that’s described as a scathing attack on celebrity-obsessed LA. The script is by Wild Palms‘ Bruce Wagner.

Read the rest, that includes where worldwide sales will launch. So excited to see this project get off the ground. Go Rob!

Email ThisBlogThis!Share to TwitterShare to FacebookShare to Pinterest
Labels: Map to the Stars, News, Pre-Production