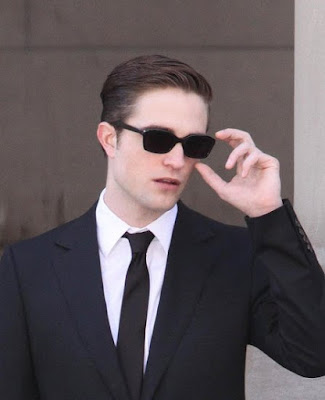 It's no surprise to see Cosmopolis on several lists of films to watch in 2012. The Playlist breaks down why expectations are high:


Synopsis: Based on the novel by American authorDon DeLillo, it centers on Eric Packer (Robert Pattinson), a young multi-billionaire making an epic, ultimately doomed limo ride across New York City.What You Need to Know: David Cronenberg is enjoying an unparalleled level of critical and commercial acceptance after decades hovering on the fringe. At the outset, “Cosmopolis” seems to fall in line with the mannered, critic-friendly films of the recent Cronenberg era. It is, after all, an adaptation of a critically revered and best-selling novel and stars hunky heartthrob-of-the-moment Robert Pattinson. But on closer inspection, the movie seems more atypical and dangerous (a good thing, since “A Dangerous Method” felt far too safe for a filmmaker known for exploding heads and genital mutilation), taking place primarily in a stretch limousine as it crawls through New York City (not exactly a cinematic conceit). A number of Cronenberg’s favorite thematic tics are explored, too, including man’s relationship with modern technology, the messiness of murder and sexual obsession. So while it might be sold as another buttoned-up late era Cronenberg think piece, we’re hoping it’s going to be ruder, looser, and more like the days of yore, even if it has to be without the exploding heads and genital mutilation.Release Date: With press for “A Dangerous Method” occupying much of Cronenberg’s time in the fall of 2011, our guess is the fall film festival circuit will be the earliest we see the picture.

Cinema Blend seems to agree on the release date, adding a big reason why Toronto is the likely location:

This year was already shaping up nicely for fans of filmmaker David Cronenberg. His latest release A Dangerous Method is currently in theaters, and while his next film Cosmopolis is still in post-production without an official release date, a Toronto International Film Festival is now looking likely thanks to some interesting news from up north. With the help of the Canadian government, the festival (TIFF) is planning a large interactive retrospective of Cronenberg's work; the grant proposal for government funding was called "The Worlds of David Cronenberg: An Augmented Reality Game." A what? Well, at it's most basic, an ARG is essentially any game where the real world is augmented by a computer generated sensory experience.

Keep reading to find out more about the interesting project, and stay tuned for more news on Cosmopolis!