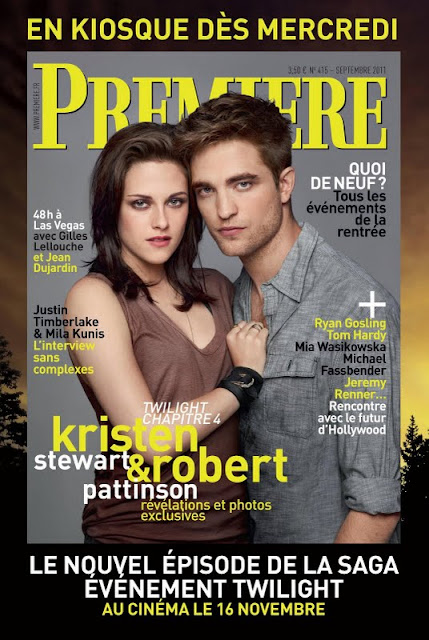 The actor talks behind the scenes of the fourth movie, a movie which is going to be as crazy as its filming. It was an intense experience that changed the star. As Breaking Dawn part 1 comes out in a little less than two months, Robert Pattinson, in a long interview with Premiere Magazine, goes back to the filming of the fourth film of the Twilight saga.

What could only have been an unusual shooting (green screen, honeymoon scene in Brazil, fans going crazy…), turned out to be an intense experience. Indeed, Twilight part 4 took a serious turn and doesn’t hesitate in dealing with sex and blood. You read it right. What some would take for a corny teenage movie, became ‘a weird drama that ventures sometimes towards the horror', confides Pattinson to Premiere before warning ‘the audience is going to get their money’s worth.’

In this interview, he admits being surprised everyday by the turn of events, shooting took. One that lasted eight months but the end product is going to be worth it. ‘No movie this size dares taking those kind of risks', says the actor who jokes about becoming an expert in ‘oral Caesarean’ (those who read the book will understand) and why he felt like the guinea pig of a weird experiment. Something David Cronenberg didn’t disapprove of.

The 25 years old gets loose and shares multiples anecdotes and secrets, as if the way shooting turn and the near end of the Twilight saga freed him. Rob talks about the most improbable scenes, the last day of filming and Kristen Stewart. The actress who was too interviewed by our magazine. She also confirms the feeling of eeriness on set. ‘I sometimes felt like Bill Murray in Groundhog Day.'

In this interview Pattinson also breaks the bland image, the movies seem to have stuck on him. He still causes crowds to show up everywhere he goes. (He talks about a little misadventure in Brazil that could have made a movie on its own.) But he did put some distance between him and the hysteria of fans and doesn’t want to be trapped anymore in a phenomenon that escapes him. Thus, when he recalls the filming of Breaking Dawn, he doesn’t spare the Twihards that will most likely be outraged by the liberties the movie took from Stephenie Meyer’s book. Liberties, that Bill Condon, at the helm of this movie, granted himself. Something that his predecessors never dared doing. ‘Too bad' for the fans, says Rob. They’ll have to follow anyway.The movie seems so crazy he asked often the crew ‘Are you sure we’re filming Twilight? Isn’t it supposed to be harmless and PG-13?'