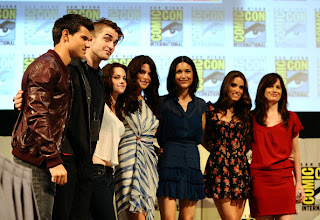 When Elizabeth Reaser spoke about working with Rob this past week, her comments made us go aww..

“I adore Rob and Kristen. They are like family to me,” Elizabeth says. “They are both very shy and very sweet. Kristen is just a little sweetheart and I love her. And Rob is the same guy I met four years ago. I don’t even think of them as celebrities until I’m going somewhere where they will be and then there’s screaming and freaking out. It almost doesn’t register until we’re in a setting like Comic Con.”

So what did she think about the rest of the cast? - read the rest at Hollywood Life. 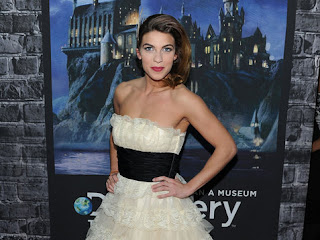 While Elizabeth's comments were sweet, Natalia Tena's story about how she knows Rob was much more revealing:

They met in their late teens on a photoshoot for up-and-coming British actors. Afterwards they went to the pub and got drunk. Tena was holding down two bar jobs at the time, so actor Tom Sturridge, also on the shoot, rang her boss and said she’d had an accident and wasn’t coming in. “Needless to say I got fired,” she says. They then decided to go to Berlin, but only got as far as Tena’s flat. She couldn’t find her passport. “We had this summer of being really close,” she says. “Then I remember Robert taking me out a few months later. He was like, ‘I’m just saying goodbye because I’m going to America for a few months to do some vampire thing.’ I said ‘Cool, I’ll see you when you get back.’” And she explodes into laughter. “Now he’s massive. Literally massive. He used to be like a labrador puppy, but he’s much more mature and serious now.” So no problem with the sex scene in Bel Ami, then? “Because we know each other, it was cool,” she says. “We just took the piss. I said ‘You just bang me. Can we make it like anal sex, because it looks worse?’”


You can read the rest of that interview at The Herald.

Email ThisBlogThis!Share to TwitterShare to FacebookShare to Pinterest
Labels: All About Rob, Bel Ami, costars, Twilight