We're At Comic-Con! - What To Expect 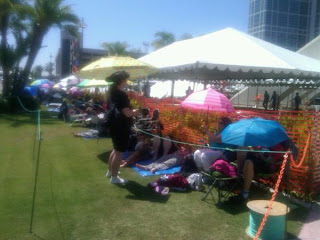 First fans to line up trying to stay cool
Day one of camping for Comic-Con has been loads of fun! - if you won't be able to join us in San Diego, here's a lowdown of what you can expect to see:

Obviously the big event is the Q&A with the stars of Breaking Dawn, and the exclusive footage from the film. Bill Condon shared a bit of a preview with Entertainment Weekly.

Not only that, but it seems at least MTV and EW are going all out with their Breaking Dawn coverage that same day.

We're kicking off our coverage in a big way Thursday with an entire hour dedicated to "The Twilight Saga: Breaking Dawn." Mark your calendars and set your phone alerts to remind you to tune into MTV.com at 6 p.m. ET/ 3 p.m. PT for a smorgasbord of "Twilight" goodness that includes exclusive interviews with the film's superstar cast and filmmakers, news from the "Breaking Dawn" panel and other tidbits associated with the film's Comic-Con events.

If you have any Breaking Dawn questions for the cast, send them via Twitter @MTVNews with the hashtag #mtvsdcc.

LIVE! Streaming Video provided by our partners at NowLive. Get an insider view from our VIP LOUNGE, where we'll talk to the casts of 'Spider-Man,' 'Glee,' 'Breaking Dawn,' 'True Blood,' and many more. Wall-to-wall coverage of the hottest panels, sneak peeks & coolest stuff from the convention floor. Exclusive portraits from our photo booth! You don't want to miss this! Updates all day long at ew.com/comiccon.

Fans attending the convention also get a special treat if they drop by the Summit booth.

Ashley Greene, Jackson Rathbone, Elizabeth Reaser and Charlie Bewley won’t be on hand for the actual festivities, but Summit Entertainment tells THR that fans will be given the opportunity to speak with them via telephone.


As icing on this Breaking Dawn Comic-Con cake, Summit has released an Edward promotional card.. swoon! 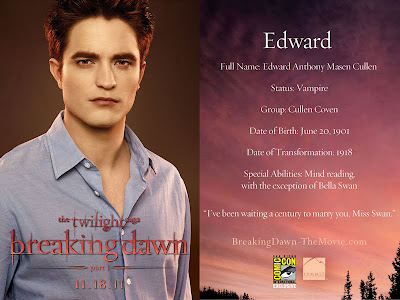 Look for the very latest from Comic-Con on our twitter page, we bid you goodbye for now from our temporary home! 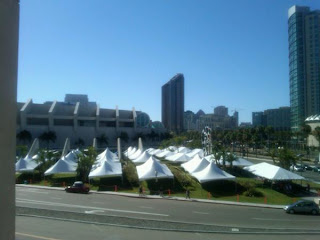