First Pictures Of Rob On The Set Of 'The Rover' 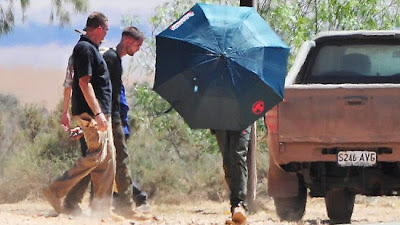 Read all the details of the shoot on Adelaide Now!

Filming began on January 29, and is expected to last through the middle of March.

Not really in HQ, but bigger for your blurry enjoyment 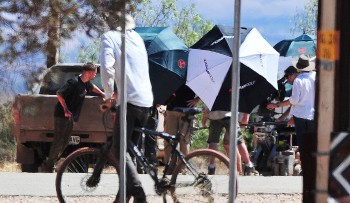 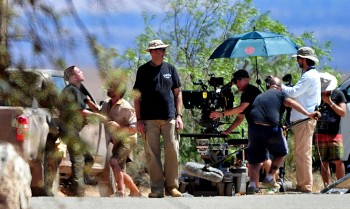 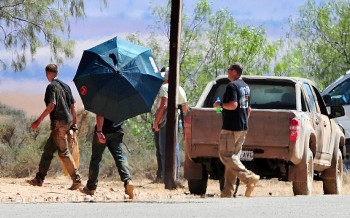 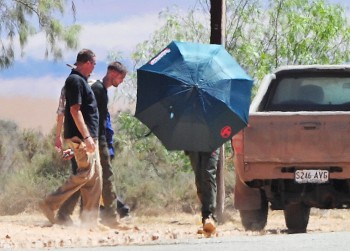 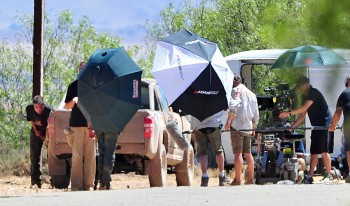 Porchlight Films and Lava Bear Films have announced that filming on The Rover started on Tuesday January 29. With support from Screen Australia, the South Australian Film Corporation and Screen NSW, the seven-week shoot will take place in South Australia.

Joining them are Scoot McNairy, who plays Pattinson’s brother, Susan Prior, Gillian Jones, Anthony Hayes and David Field. All have descended on regional South Australia for the hot and dusty shoot.

While donning the directorial hat, Michôd also wrote the script for The Rover based on a story he conceived with Joel Edgerton (Zero Dark Thirty). The film is set in the Australian desert, in a dangerous and damaged near future. Eric (Pearce) has left everything, everyone and every semblance of human kindness behind him when a gang of desperate criminals steals his last possession. Eric sets off on a ruthless mission to track them down, forced along the way to enlist the help of Rey (Pattinson), the naïve and injured junior member of the gang who was left behind in the chaos of the gang’s most recent robbery.

Liz Watts is producing for Porchlight Films and David Linde for Lava Bear Films. Watts and Porchlight Films produced Michôd’s debut feature Animal Kingdom. At the start of production, the producers commended the enthusiasm of the cast in their new environment.

“The South Australian desert environment can be a tough one to work in, particularly for those coming from a Northern Hemisphere winter but both the cast and crew have thrown themselves into the shoot. We are shooting in some of the most haunting and stunning landscapes in the world, and are fortunate to have such an exceptional cast and a truly talented crew,” Watts and Linde said.

FilmNation represents U.S. sales with UTA Independent Film Group. FilmNation also acquired the majority of worldwide sales rights to The Rover and the film has already been sold to leading distributors around the world - including Australia where distributor Roadshow Films’ Managing Director Joel Pearlman added “this is an incredibly exciting project which we are thrilled to be working on with Liz, David and the whole creative team.”

Shooting completes in mid-March in South Australia, with postproduction taking place in Sydney.

Stay tuned for the latest from Australia!

Email ThisBlogThis!Share to TwitterShare to FacebookShare to Pinterest
Labels: Australia, In Production, The Rover