Rob On James Franco, Edward As The Bad Guy, Twitter 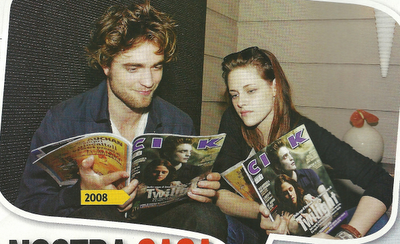 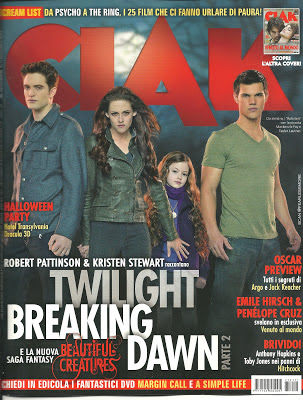 Would you make another movie of the series?
"Only if Stephanie Meyer wrote it. But at this point I wonder what could possibly happen. Maybe Edward could turn into a bad guy? Yeah, that would be something."

What was the weirdest experience you've had with a fan?
"At the last Comic Con in San Diego, I was with Kristen who was also promoting Snow White and the Huntsman, and a girl approached me to ask if I felt comfortable being Prince Charming. I wasn't able to convince her that it wasn't me..."

Wasn't it a blow to your ego?
"Not really, it only made me laugh. There was another time during a road trip, I found myself in a small village in an Indian reservation in New Mexico. As soon as I got off the car, I was surrounded by a group of kids who started calling me by my name. This should compare with story of Comic Con."

Which was the hardest movie of the series?
"Breaking Dawn. It's two movies but we shot them back to back. Which means a 2 hour in the make-out trailer every day for 8 months."

What will you miss next year?
"The 3 months in Vancouver. I grew attached to that city."

Do you think that Bella becoming stronger somehow represents today's society and women's more and more important role?
"I don't know, but it would be a good thing to be honest."

Do you like the archetypal strong woman?
"I grew up in a house full of women, my mother, my sisters, my father even. No, no, it's a joke, don't write that, I wouldn't want my dad to get hurt. I'm sorry, my sense of humor is a bit weird."

What have these 5 years been like?
"A revolution. I never would have thought I could have this career or I would live in America. The downside is that it would have been better if it had happened before twitter and phones with cameras."

What do you think of this job?
"We have become the most conservative people in the world. You can't even raise your voice, because everything will affect your career."

Do you ever feel alone?
"It's hard to make new friends because you always think they actually want something else."

The wrongest thing people say about you?
"That I'm like Edward. People tend to forget that Twilight is a movie."

An actor you like?
"James Franco. He's intriguing in everything he does, and he seems to have so many interests that he never does the same things.