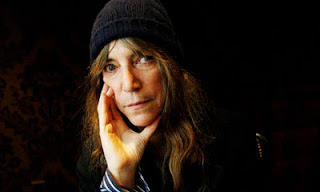 Singer Patti Smith recently mentioned Rob while talking to EW about her memoir:

“I remember the very first time I saw Kristen Stewart and Rob Pattinson together, when they were younger, and I thought, ‘Those two kids could have easily played us when they were first starting,” said Smith. “There’s something in his eyes. And Robert [Mapplethorpe] was also a bit shy, and a bit stoic. Kristen has a very special quality. She’s not conventionally beautiful, but very charismatic.”

Daniel Cudmore also talked about Rob in his interview with Glamour:

Q: Phew! Did you get to hang out much with Rob, Kristen and Taylor during filming?

A: Um, not so much Taylor. Rob and Kristen a little bit, here and there. During filming they were

always working. So, a little bit off camera, but not a lot.

Q: Because you had that great scene with Robert in New Moon, is that the one that people talk to you most about?

A: I think so, just because it was the first experience with the character and also the fact the lead character is almost being killed, um, a lot of fans weren't too happy with me, which in turn I was thrilled about because it means I did my job properly.

Email ThisBlogThis!Share to TwitterShare to FacebookShare to Pinterest
Labels: All About Rob, costars, Pop Culture, Twilight