Rob On Why He'd Have A Boy Instead Of A Girl 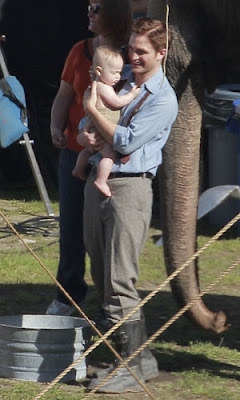 Star Club Magazine (France) interviewed Rob, and while some quotes sound familiar there is a lot of new stuff in his answers. Like why a boy may be a better fit when he becomes a dad. Read it now! (translation via) - and check out the scans at LeRPattzClub.


SC: Hello Rob, what did you learn from your experience filming Twilight?
RP: I learned to put things into perspective, that the circus surrounding an actor's life is fleeting. You can be worshipped one day and hated the next. For now, the craze aroundTwilight is still there but I'm not naive, a few months after the last movie is out, people will have moved on. Our replacement is already here. I'm thinking mostly about The Hunger Games actors.

In the end, you're still happy to have played Edward, right?
Rob: Yes, he's an extension of myself, like a good friend. He helped me learn more about myself and I will be eternally grateful. I grew up though and if tomorrow Stephenie Meyer writes a sequel to Twilight, I'd gladly read it. I don't think people would like me reprising the role. I'd be too old to play him again.

What was your life like before your success?
Rob: I had a hard time finding roles. It's simple, for three years I found nothing but small productions that payed around $40 a day. Just between you and me, I was seconds away from giving up so when I was offered the role of Edward I couldn't believe it.

You didn't see yourself in the role of a vampire?
Rob: I didn't have a choice, I was broke! Nobody believed in me except for Catherine Hardwicke (editor's note: the director) who sort of had to force the producer's hands a little. In the end, this role helped me improve my everyday life and my life style. On the other hand, I lost what I cherished the most: my freedom. Some told me that it's the price for success. I'm sorry to disagree but I feel like it's a price too high to pay.

So did you view the end of the filming as freeing?
Rob: It's strange, I felt like releasing a big 'phew' of relief but at the same time I felt sad. For now, I know that I'm successful. Will it last? I have no idea, but if tomorrow I encounter movie failures, I won't cry about it.

Let's go back to your teenage years. I'd like to know in what kind of state of mind you were the day before the start of a new school year...
Rob: If you're looking for the speech of a the kid who was at the top of the class, you're not gonna get that from me. I wasn't a bad student either. When I was fifteen, I was a boy who was disciplined, who would learn all his lessons and pay attention in class until the day I started reading. I thought I learned more from life by reading than at school. I'm pretty please by the way that I indirectly influenced young people to take pleasure in reading. Indeed Twilight helped a whole generation to love reading about a love story as captivating as it was fascinating.

The big question! If you were to become a dad tomorrow, would you prefer to have a girl or a boy first?
I think that I'd have a better understanding with a boy. Girls are hard to understand. The instruction manual that comes with them is 800 pages long and written in Chinese! And if you know how to read it, you realise that you're still missing 32 more chapters that are essential and you have to improvise. Whereas with a boy, it's easy. Sports, tv, a video game, a big bowl of ...., some Coke and he's happy *laughs*! 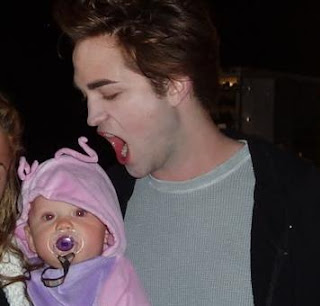 Email ThisBlogThis!Share to TwitterShare to FacebookShare to Pinterest
Labels: All About Rob, France, Promo, Twilight