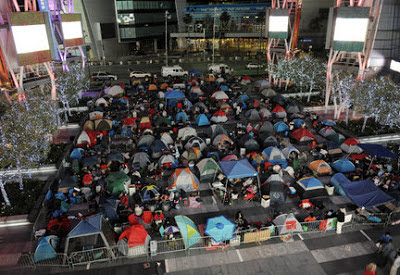 Per Summit via Twilight Lexicon:

A record-breaking number of Twilight Saga fans will participate in the SummitEntertainment-hosted fan camp at L.A. Live in anticipation of THE TWILIGHT SAGA: BREAKING DAWN – PART 2 world premiere. Beginning Thursday, November 8th, diehard fans from around the world will begin camping for the chance to see the stars of THE TWILIGHT SAGA: BREAKING DAWN – PART 2 walk the black carpet one final time at the November 12thpremiere at Los Angeles’ Nokia Theatre.

After a huge turnout last year with over 1,200 fans participating, Summit offered spots at this year’s camp to 1,500 campers. Due to an amplified response from fans, the studio increased the camp size to accommodate a total of 2,250 campers. This will be the franchise’s largest camp to date and will host nearly double the amount of campers from last year. In recognition of their loyalty, Summit Entertainment will host a series of activities over the four days for campers. Event details to be announced soon.


For those of you who can't make it, Yahoo Movies has just announced they are streaming it live, and we'll be bringing you updates on the ground. Page to Premiere also has a great camping guide for those unfamiliar with what goes on.

See you in two weeks!