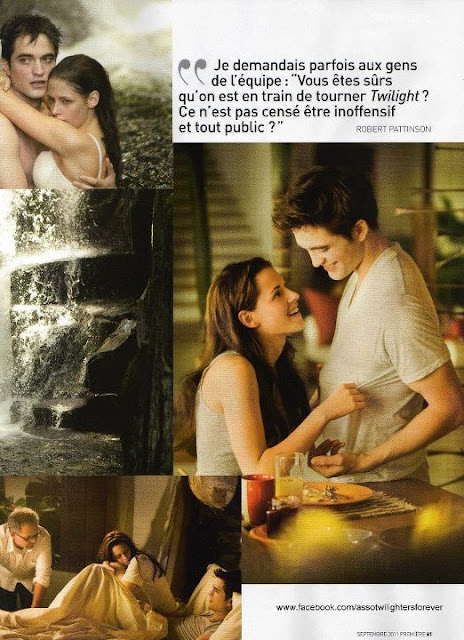 The upcoming issue of Premiere magazine (France) has a new interview with Rob, and also includes a new still of Bella and Edward. See the rest of the stills.

Full translation (Rob's part) by RPLife where you can also read Kristen's interview.

Première : How long did it take to film both movies ?
RP: 8 months!

P: Not to quote her, but Kristen Stewart told us 6.
RP: I had to stay longer.

P: Were there some mornings when you got up and asked yourself: ‘I can’t believe we’re still filming this movie.’?
RP: For sure, I mean we spent two months shooting in the same room in front of a huge green screen.

P: I hope it was the sex scene!
RP: Nope! This one we wrapped in a day. No, we had to film scenes where nothing happens. We were trapped in this green screen room with fake snow all over the floor and we spent our days barely saying a word, looking each other in the , trying to look as intense as possible.

P: Nobody told you you were part of an experiment?
RP: That’s it exactly, ‘We’re going to put you in this green screen for 8 weeks, we’ll see which one will break down first.’

P: Did Bill Condon come on set with his Oscar beneath his arm?
RP: No, that’s not like him. But I don’t think he realized what he got himself into. He’s someone that doesn’t stress much though or he’s really good at hiding it!
It’s funny, really. Everyone came to him screaming: ‘Bill did you see this? It’s nonsense!’ He’d just look at them and say ‘I know, it’s crazy.’ And the next second, he was gone.

P: It’s a way like any other of solving problems.
RP: You should have seen him. ‘I completely agree with you. It’s a disaster.’ And then he’d been gone for the rest of the day. Bill is hilarious and he put some of his sense of humor in the movie. The Twilight saga is not really known for its fun side but the previous directors seemed really attached to the angst aspect. The beginning of the last movie is the complete opposite: light, relaxing…

P: The first images of the trailer looked indeed bright and sunny.
Bill is an excellent screenwriter as well. Like Chris Weitz, who was more daring with New Moon. He wasn’t scared of drifting away from the book sometimes. In any other movie, when a line doesn’t work, we change it during filming so it flows better. But it wasn’t always possible with Twilight. If I was ever uncomfortable with a line, I was told ‘You have to say this. It’s in the book!’ Bill didn’t hesitate, ‘We’ll adjust, it’s my movie after all'… *laughs*

P: You just made millions of fans angry.
RP: Too bad. It just reminds me of something I saw not too long ago, when I stumbled into a picture of a girl who had the famous line ‘And the lion fell in love with the lamb’ tattooed on her. I looked at it twice and she had ‘And the lamb fell in love with the lion’ instead. Can you imagine that, having a movie line ~engraved on your skin and it’s not even the right one?

P: In the first three movies, it’s always about repressing sexuality. In this one, it’s party time: midnight baths, sex scenes where the bed breaks, a rushed pregnancy… I don’t know if I can handle all of this at once.
RP: It scared me a little too, to be honest. When I heard about the last book and was said: ‘You’ll see, they sleep together all the time, it’s rough sometimes too. Jacob falls in love with a baby'… I was dumbfounded. Summarized like this, you’d think it was the most screwed up story ever. But when you read it, it’s not as shocking/scandalous. For those who don’t know the books, I’m sure this movie is going to be by far the most interesting of the saga. We’re gone from the teenaged fantastic genre and enter a weird drama that ventures into horror at times. There are scenes were Bella looks like an alien. When the baby eats her from inside, she looks so thin and ghastly. Kristen had to wear this horrible makeup and when I’d see her come on set, I’d ask the crew: ‘'Are you sure we're filming Twilight? Isn't it supposed to be harmless and PG-13?'

P: I’m sure David Cronenberg is going to be pleased. ‘Robert just filmed the adaption of Cosmopolis by Don DeLillo.)
RP: I think he’s going to enjoy certain scenes, like the one where I open her up by biting thorugh her placenta. It wouldn’t have played up in one of his feature films, he would have filmed it with a close-up of course.

P: With Breaking Dawn, I think you will attract a new audience. Beginning with those who will want to see it for the twisted plot.
RP: They’re going to get their money's worth. It’s hilarious, No movie this size dares taking those kind of risks. But since the craziest scenes are a big part of the story going forward, it was impossible to not have them included in the film. We would look at each other everyday and say’ I think we don’t have a choice, we have to film those weird stuff.’ There was no way we would tone it down.

P: So you became an in 'oral Caesarean' expert?
RP: It was without a doubt the funniest thing I ever had to do. I’d raise my head up and I was covered with cottage cheese or whatever substance they put in there. Before filming the scene, Stephenie Meyer, a midwife, Kristen and I sat down to talk to a doctor to decide where I was supposed to bite if this situation would ever occur in real life. The doctor looked at us a bit puzzled and said: ‘I don’t think you could ever do this in real life.’ *laughs*

P: I’m getting more and more excited to see this movie…
RP: I’m eager too. I’m probably going to die laughing watching it.

P: Stop me if I’m wrong but I feel like the hysteria surrounding the saga is dying down, that you can now lead sort of a normal life…
RP: Not yet, no. In LA I have at least 40 seconds from the moment I arrive somewhere, before I get asked for my autograph. It’s Twitter’s fault. If this website didn’t exist, I’d be in peace. When I cross a glance at someone, they hurry to get their phone out. I know perfectly well that I’m screwed and that I’m going to spend a big part of my day shaking people off. It’s frustrating.

P: Is it true that you caused a riot in Brazil, when you filmed the honeymoon?
Yes, we did cause one at the airport that almost got us arrested. I still don’t know why but it was kind of scary. The immigration guy told me: ‘You’re in my country, we’re gonna play by my rules.’ ‘Whatever you want just let me leave your airport.’ *laughs*

P: How was it like on set on the last day of filming Breaking Dawn, when you had to say goodbye to 4 years of Twilight?
We were in Canada for the last day of shooting with the entire crew. A normal day on the set of Breaking Dawn, we were shooting at night, it was freezing and raining… When the first assistant announced the end with his clapperboard, everybody locked themselves up in their trailer without even having a last drink. But my last day, strictly speaking, came a bit later and it was amazing. Part of the crew got back together to film additional shots in the Caribbean. It was just Kristen and I, no worries… We were shooting in the sea so I didn’t have to have makeup on or wear my contacts. It was so hot, at the end of the day we all went out for cocktails on the beach, watching the sun rise. I then asked myself why we didn’t do this in those four years. Every difficult moment just vanished.