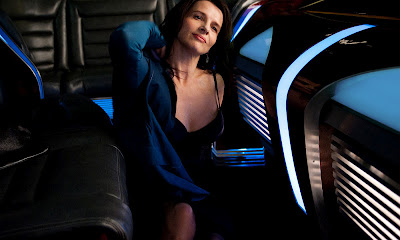 I’m an art dealer. I only shot two days. The whole film takes place in a car. There are some scenes outside, but mostly it takes place in a limo. Cronenberg placed Robert on one seat, and I was the mover in the scene, so he let me improvise. It was fascinating to see how they would take time to light the car. It was like an art form almost, a painting. His [cinematographer], Peter Suschitzky, is very precise in that way.


Robert was stunned to be taken by Cronenberg, because he didn’t think he could do it. But Cronenberg believed in him. It’s amazing—a director sometimes makes you do bigger things than you imagine. You need to have, like, a midwife to give birth. You need this midwife in order to grow, and imagine these new layers in yourself.


I’ve seen a little bit of you in “Cosmopolis.” You’re in the car, wearing a little black dress, making out with Robert Pattinson. Who do you play?I play an art dealer who’s been a lover of Robert Pattinson’s character for a few years. Throughout the whole film she has this kind of sexual moment that Cronenberg always puts in his films. Then at the end she’s feeling alone and left out. I don’t know how long the scene is – maybe four minutes – but it’s like a lifetime, a relationship kind of starting and ending.Was it exciting working with Cronenberg?Yes, though it was only two days shooting. It’s always interesting wondering whether you’re being taken into a film, or whether you’re taking the director into it. When you work with great directors, you never know who starts it. Being stuck in a limo means you have to use your imagination. So Cronenberg played Robert in one spot and after that he let me do what I wanted, and when he was satisfied we stuck with that. He was precise language-wise, but otherwise he let me be, emotionally. It was good.