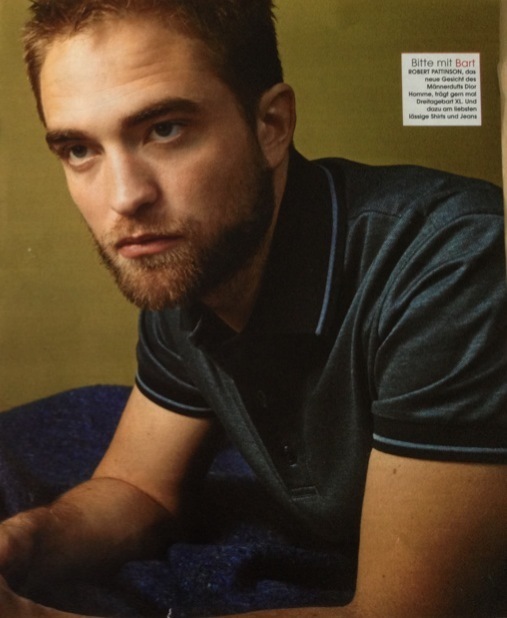 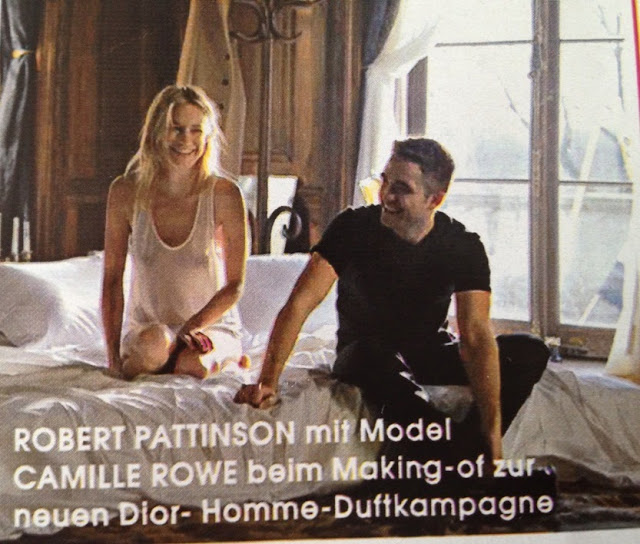 SEE THE REST OF THE STILLS

Translation by @enamoramiento1 via

Robert Pattinson, Twilight star and face of the new Dior Homme campaign, explains why he wears suits only once, what he likes to spend money on and why Bernadette is his true love.


Robert Pattinson, looking suave with short hair and in a black designer suit, is kissing model Camille Rowe with so much passion, you'd think there's something going on between the two of them for real. Maybe this sexy production to introduce him as the new face of Dior Homme is meant as a farewell to his Twilight-love Kristen Stewart: passionate, unconventional, surrounded by half-naked beauties. A clever move from Dior and a change of image for Rob. From teen-idol to man. During the interview at the Beverly Hills Hotel he's still hungover from last night's premiere-party. Dressed in Nike sneakers, Jeans and Acne shirt, with cap and scruff, his electronic cigarette at the ready. But he's hardly ever been in such a good mood. Does he prefer the single-life to togetherness? "There's no good answer to that question" he says. For others, it seems, there are.

Q: As soon as you have left Twilight behind you, you´re having the next generation swoon as a model for Dior Homme. Have you come to terms with your sex-symbol status?
A: (laughs) It was a deliberate move. I'm older now. Until last year, I felt like a child, self-conscious and insecure. Everything seemed to just happen to me, I was simply very lucky. My ego had to catch up with that, too. But now I have a career to plan.

Q: You could take a break for a year. Or go back to London.
A: London isn't the same place for me anymore. The last time I really lived there, in my own appartement, was six years ago and meanwhile, almost all my friends have moved to New York and only my family is left.

Q: Dior presents you as a modern James Dean. Do you live like every day was your last?
A: Somehow, yes... If I were to die tomorrow, it would be ok. Cause I didn´t deny myself anything. But I don´t have a very exciting life.

Q: What was the most exciting thing that has happened to you lately?
A: Not putting my seatbelt on while driving!

Q: That only counts if you're still the bad driver you used to claim to be.
A: I'm a much better driver now, not that anxious anymore. Must be because of my new self-esteem. Or because I was stuck in traffic for too long. You just have to be frustrated enough to lose all your fears!

Q: Who keeps you save in your life as a celebrity?
A: I don't have an agent. I can say No on my own. My dogs though, Bear and Bernadette, they've grown into some serious guard dogs. They're chasing away anyone who comes near my house. But I don't own anything of value, you could only steal my couch (laughs)

Q: But you still like designer suits.
A: Absolutely. I have a strange relationship with my suits; I wear them only once, but I can't seem to part with them. There must be a thousand in storage.

Q: Sounds quite vain.
A: I still prefer drinking beer to working out. But I've come to terms with the fact that my looks are part of my brand. Everything I invest in that brand hopefully leads to another job.

Q: Does that mean that on the red carpet, you're putting as much pressure on yourself as your females colleagues do?
A: I keep having panic-attacks (laughs). Acute anxiety from twisted body perception or maybe I'm just afraid that I've picked the wrong outfit. My stylist, Ryan Hastings, is driving me crazy with his many options.

Q: It seems to work, though, you always and up on the "best dressed"-list.
A: That´s thanks to Ryan, too. Although, that Gucci suit from the last Twilight premiere, I designed that myself. Emerald houndstooth.

Q: Are you wearing strictly Dior now?
A: On my skin, definitely (laughs)

Q: Do you have a sensitive nose?
A: Yes. I can smell when someone feels uncomfortable or is lying. It smells sourly.

Q: How did the first woman in your life smell?
A: My girlfriend when I was twelve? Like soap and laundry detergent. That was strange. I think it´s ok to be a little dirty...

Email ThisBlogThis!Share to TwitterShare to FacebookShare to Pinterest
Labels: All About Rob, Dior, Promo